Today I was interviewed on “The Grateful Dad” radio show.  The episode highlighted the issue of men’s mental health. I shared my story of struggling with bipolar disorder and my road to recovery such as it is. Sally Spencer-Thomas of the Carson J. Spencer foundation was also interviewed. Her brother battled bipolar disorder and committed suicide six years ago. The intent of the show was to to encourage men to seek help when needed. It can be a really tough thing for guys to seek help for mental illness. There is the stigma attached to it as well as cultural expectations for men to be tough. That is changing somewhat but it’s still a factor. 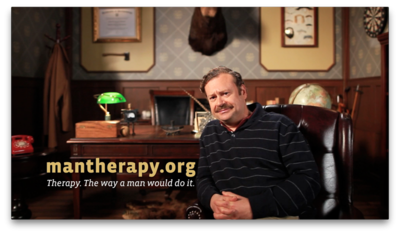 I can relate to the bone jarring despair of depression and wanting to be done with it. Men have got to get help. There is no need to suffer endlessly or anonymously any more. Sometimes that means friends taking the initiative to get the help that’s needed.

The best resource I have ever found for men to explore the nature of mental illness and feel safe to get the help they need is ManTherapy.org. It’s fantastic for friends to be resourced as well. You have to see it to believe it. It is the most creative site I’ve seen in a long time. The agency that created the campaign is based in Denver and took a humorous approach to a serious issue without demeaning it at all.

If you are a man suffering from mental illness, or a friend of a man who is struggling with it, visit the site. Begin the critical journey of getting help for yourself and others. Mantherapy.org is a powerful portal to a new life.

How about you? How has mental illness impacted your life or someone you know? What have you done to get or give help? Respond below.

Why bronze medalists are happier than silver winners

Obviously, with so many athletes competing not everyone wins the gold. Some win a silver medal and others a bronze. Interestingly, an article in Scientific America pointed out that those athletes who win a bronze medal are more satisfied with their victory than those who win silver. The difference? Bronze medal winners are acutely aware of how […]