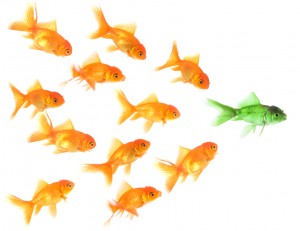 Research by Cameron Anderson and Gavin Kilduff explores social status in groups. In one experiment they wanted to answer why some people become leaders in groups and others don’t. In an experiment where the group had to solve a problem, the researchers observed their behavior and monitored their conversations. Their observations yielded two surprising answers to why the leader becomes the leader of a group:

The leaders were the first ones to speak, and the dominant personalities always spoke first.

In addition, the first answer to the problem was the one the group usually went with when all was said and done. This creates a bit of challenge. The first answer isn’t always the best one, so the leader has to be humble enough to relinquish his idea. Also, there is a propensity by the leader to dominate the discussion. Good leaders, rather, will encourage facilitation. It’s the difference between monologue and dialogue.

Leadership is critical for groups to function well and good leaders will use their dominant personalities in the service of the entire group.

What other characteristics define a good leader? Comment here>>