Getting back on the bike 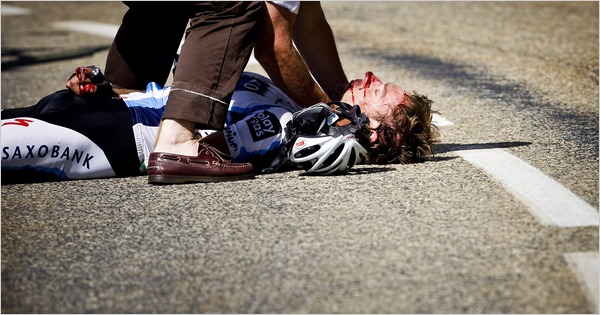 Last year during the Tour de France, Jens Voigt, one of the finest and most popular cyclists in the world crashed on a downhill descent and faceplanted on the asphalt going about 40 miles an hour. He shattered most of the bones in his face as well as split his jaw in two. He was unconscious for over four minutes. He is lucky to be alive.

I’ve bit it a few times on my bike and watching Jen’s spill made me queasy. To get an idea of what crashing on a bike is like, push yourself out of a car going 40 miles an hour. It is that reality that keeps some bikers from every riding again.

“After a really big crash, especially with an injury, some riders get right back on the bike and some need time to prepare themselves mentally for coming back,” said Helge Riepenhof, a doctor for Team HTC-Columbia who has studied injuries in cyclists. “The healing process is 50 percent physical and 50 percent psychological. And some riders, really, they never can get back to the fullest. They just never make it. The fear is just too much.”

Jen returned two months after his devastating crash. The ability to bounce back as he did is testament to his mental fortitude, the healing of his psychological resistance and fear of getting back on the bike.

The rockwell transmission Change your mind