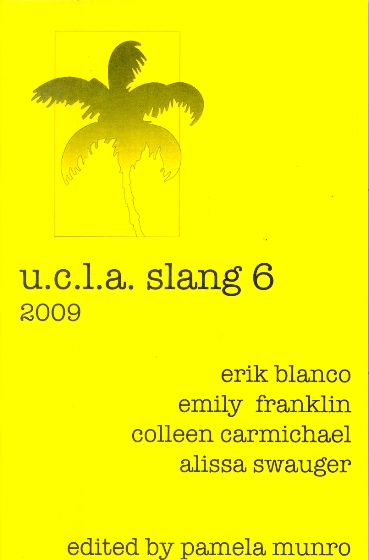 When I was teaching High School, I learned a whole lot about contemporary slang.  The particular phrases and peculiar turn of a word my students used in casual conversation made me laugh and cringe.  I used to quip with my students that as soon as I found out the nuances of their slang, it had lost it's street cred and traveled its arc from hip to lame. It couldn't be cool.  How could it?  A guy my age inevitably is a late comer to street level language.  Yet, given the speed of communication and many links of social networking, the life of slang is now shorter than ever.

"U.C.L.A. Slang 6" is a recently released compendium of student colloquialisms providing what it calls "eargasms" since 1989.

Some interesting insights from the book:

"Schwa" — a synonym for "wow" — exemplifies the rarest approach to slang creation: pulling new words out of thin air.

"Destroy" means the opposite of what you would think: to
do well on something like a test, according to "Slang 6." And the
phrase "dropping the kids off at school" (which I knew) has a scatalogical rather than
an educational meaning.

The lingo of texting provided such visual entries as "QQ," an emoticon
similar to a smiley face that, in this instance, stands for the verb
"to cry." (clever!)

Rhyming helps phrases like "sisters from another mister" and "brothers
from another mother" — slang for friends so close they seem like
siblings — catch on and spread.

Abbreviation is another gold mine. Clipping — cutting a
syllable or two from a commonly accepted word — produces words like the
verb "presh," short for precious, and the adjective "bellig," which
rhymes with fridge and is short for belligerent and drunk.

Older generations will be happy to know that"Cool" is still in there. "Cool" is one of those words
where everybody knows the word, but still thinks it's slang.

Here are a few of my own eargasms.  Let's start a viral progression of their usage in our culture:

"No returner" or "norer" refers to a person who never answers emails or returns voice mail.  It could be used as, "Don't even bother with her anymore, she's a total "norer"; or "a 'norer' is an annoyer".

"Epixalated" refers to our increasingly digitized forms of entertainment.  It could be used as, "I never read books or newspapers anymore, I'm too "epixalated"; or, "why go outside when I can epixalate inside".

"rat a tat" refers to a person on Twitter, Facebook or any other social media site who focuses extensively on how neat and wonderful their life is. The constant barrage of updated minutia that accentuates the narcissism is called "rat a tat". For example, "Whew, that person's wearing me down with all their "rat a tat" on Twitter.

And finally, there's "schnooky ray dooky" referring to deep desire in our fast pasted world for rare, but much needed, and valued rest, "I can't go out tonight. I'm getting some "shnooky ray dooky".

How 'bout you, can you add to the list?  Let me know and I'll compile them for a later post.

The star of our show

Since one of my favorite topics is emerging culture, my radar activates when I hear two psychiatrists, Joel and Ian Gold, calling a new psychosis for our YouTube society “The Truman Show” Delusion.  There seems to be a small but growing number of psychotic patients who describe their lives as mirroring the main character in the […]