One of the laments I hear in this day and age is the perceived loss of community as it is fondly remembered by older generations – the face to face, porch sitting interactions among friends.  Yet, it seems that community is alive and well and being redefined for the digital age.  A very interesting article appeared a few months ago talking about “Ambient Intimacy”.  With the instant messaging and 24/7 connectional reality of younger people, there is an addictive, almost intriguing impetus to stay constantly updated on the lives of their network through simple message programs like “Twitter”.

According to the article, a new influence on our lives is "microblogging": tools for posting frequent tiny updates on what you're doing.  Unlike the more lengthy and thoughtfully considered blog posts (like this one, maybe) microblogging messages are far shorter, far more frequent and less carefully considered.

Those over 30 find it rather disconcerting to be continually updated on the minutiae of friends lives.  Yet, here is what is intriguing about the research on those who microblog on a regular basis:  The awareness of the other person, and knowledge of who he/or she is increases.  Interestingly, the community of microblogged connections seem to be pretty intimate after all: users began to sense the rhythms of their friends' lives in a way they never had before.  Social Scientists have coined this “Ambient Intimacy”, a type of mind-reading, invisible dimension floating over their everyday lives.  I found a data visualization on just one person’s twitter connections (and I’ve heard this is pretty “benign” as far as it goes) to highlight its ubiquitous and complex nature.  To see more visualizations of the twitter universe, click here. 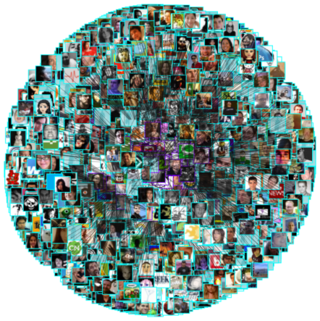 The Star of our own show Atoms and Bits